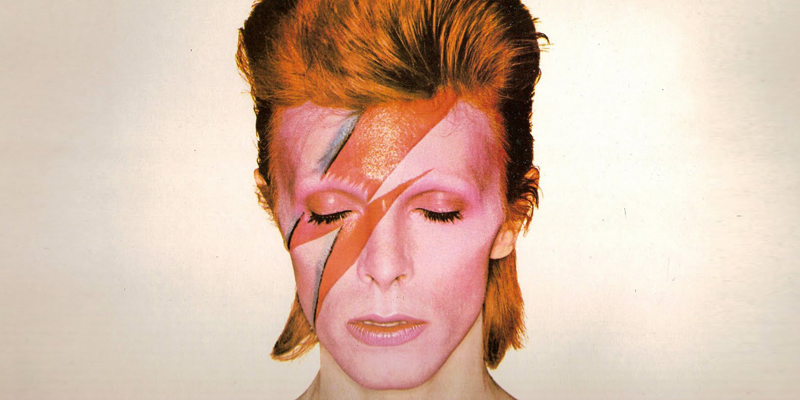 My husband broke the news to me via text.  He’d read it on a football forum he was reading on his way to work, and hoped it was the usual internet rumour bullshit that so often appears.  I turned on the TV and chose Sky News (something I never do, as my previous career in Media Monitoring has ruined rolling news for me… but I digress…).  And there it was.  Eamon Holmes delivering the news that I so desperately didn’t want to be true, but somehow knew that it would be before I even tuned in.

I started crying.  Like I’m sure millions of fans did when they heard the news.  Trying to take it all in as statements were read out, and videos of Bowie were shown.  Cancer.  Fuck you, Cancer.

My little boy, obviously oblivious to what was going on, was just staring at the TV.  Transfixed by the vibrant colours of Bowie.  I regularly sing Magic Dance to him; I did so that day too and will continue to do so.

And so onto Facebook, where I saw the outpouring of grief filter through from so many different people as they heard the news.  It has been clear for some time that particular people were massive fans of Bowie (and their statuses were moving and plentiful), but I don’t think I really realised how much he had affected so many people.  With a career spanning 6 decades, people of all ages, and for all different sorts of reasons, loved him.  For me, it was my Dad playing David Bowie that got me hooked.  And watching him as the goblin king in Labyrinth as a child… and still being able to quote it almost verbatim as an adult.

David Bowie is one of the very few artists that my husband and I both love.  Our musical tastes are quite different, and picking the first dance song for our wedding was a complete nightmare (how could he not want A Million Love Songs by Take That??).  And then the week before our wedding, he played me “Absolute Beginners”.  And it was perfect.  We both felt a huge connection to this song, and it just seemed to fit.  I always smile when I hear that song, as it reminds me of such a special day… but hearing the song right now, it’s tinged with a sadness.

You may not have listened to his music every day, or watched every music documentary on him, or read any of the books.  But death is sad.  And Bowie’s death seems like it belongs to all of us.  We all have a feeling of loss from the death of this cultural icon.  I look forward to playing my son plenty of David Bowie as he grows up.

This tweet was – spookily – written the day before he died, but then became extremely relevant to so many people.  The sentiment is well worth remembering.